Back to the Beginning: A Conversation with Mitchell James Kaplan About His Novel, Into the Unbounded Night

Children’s Ministry in a Pandemic: The Three Cs

Coal in My Stocking

Global Mission in the 21st Century

How Has the Pandemic Affected Your Faith?

Lessons from the 2020 Pandemic

Preparing Lay Ministers for Pastoral Care: Community of Hope International in the Diocese of New York

The Challenge to the Church during Covid-19

Worship in the Land of Trolls and Bombers

Stepping into Unknown Territory: Initiating an Enhanced Video Ministry for a Virtual World

When the Covid crisis struck and we were forced to abandon public worship here and across the nation, Manhattan’s Church of the Incarnation, like many other New York parishes, began to explore platforms for remote worship.

We made our initial decision to try to stream services in early April and began researching various possibilities. For example, Church Streaming TV, which offered a 90-day free hosting program, made suggestions for equipment use and helped us to identify tiers of choices at a range of prices. Incarnation initially opted for the least expensive of these solutions.

The Church of the Incarnation in Manhattan

We also collaborated with technicians at a nearby electronics store that specializes in video, who provided us with phone and chat support during lockdown. The store had quick turnaround times if gear was picked up at its store in Manhattan; it also offered not-for-profit discounts on larger orders, had good systems for ordering, and honored our need to avoid taxes that do not apply to nonprofits.

Simultaneously, we talked with other churches—some of which were advanced while others were just beginning—to find what they had done.

When the equipment arrived, the church’s sound system designer wired a single cable “out” from the public address system. That plugged directly into the camera, which was on a tripod in the center aisle.  A laptop and encoder fed the stream to the Internet and on to Church Streaming TV. The software interface we chose is OBS (Open Broadcaster Software – https://obsproject.com) , which is freeware used by many professional videographers.

We soon realized, however, that livestreaming using our existing cable Internet connection (100/15) would not work. We therefore began to pre-record our services, and continued to do so successfully through Advent I. We recorded sessions on Friday afternoons; did some light editing using Adobe Premiere; and then placed the videos on YouTube to premiere every Sunday at 11:00 a.m. – followed by a Zoom coffee hour. The result was that the church not only experienced good congregational retention but also increased its views both throughout the week after the premiere and over time. We found, in fact, that former members from around the country, as well as overseas, began to return to the church.

While we continued to pre-record Incarnation’s services, we researched what other, more experienced, churches were doing. A nearby Episcopal church, for example, had been streaming for close to two years: we evaluated that church’s elaborate set up and attended several sessions during which a volunteer streamed organ concerts. That live hands-on training led us to send a proposed “Phase 1” document to the vestry seeking authority to proceed.

Our plan called for remote control cameras, known as “PTZs” because they can be panned, tilted, and zoomed from a control area located anywhere nearby. We “hid” these cameras, which can rotate through 270 degrees and are connected by an inconspicuous Ethernet cable, on columns about 10 feet off the ground. There is no need for power “at the camera,” as the camera receives sufficient power from the Ethernet cable that carries images to the computer.

Phase 1 included four of these PTZ cameras, two professional microphones, a mixing board, a camera controller board, a new microphone for a singer, a laptop, two monitors, and miscellaneous IT supplies such as cables and switches.  Parts and equipment details are available upon request; you may choose different gear, but we strongly recommend you confirm purchase selections with an “expert,” as there are multiple options and technologies available and your choices will affect how you place and control your gear.

When the equipment arrived, we used in-house labor to install and wire it, with occasional engagement of a single contractor for wiring Ethernet plugs. We had previously engaged a professional videographer to train a church employee to use the OBS software with the single camera; that expert now studied configuration of PTZ cameras and was hired to help configure the cameras, sound booth, and microphone. The project manager was the church’s IT specialist.

Simultaneously, two new developments towards the end of 2020 cleared the way for Incarnation to switch from pre-recording to livestream. First, Verizon Fios fiber optic service became available and the church decided to upgrade its IT closet.  Livestreaming was now not only possible, but streams were steady and reliable using YouTube as the platform (there are other platforms such as Vimeo which offer subscriptions without ads and allow users to customize streams and manage content.  Vimeo is more often a corporate platform, where public Internet is a less desirable option).

The second development was the recognition, derived from looking at our videos, that we needed to improve the church’s lighting. The space is large, and while the altar, chancel and choir were well lighted, the pulpit, lectern, and center choir aisle had dark spots. A modest investment in used theater lighting – and consultation with a Broadway lighting designer – resulted in the purchase of six professional theater lights to address this.

It is important to stress that while Incarnation’s budget was larger than would be the case for many churches in the diocese, streaming truly is not just a “big” church opportunity. It comes in a variety of flavors:  Some smaller churches use single cameras and produce excellent results; a church we know of in Westchester opted for a two-camera solution; others have borrowed gear “to see what it is like.” 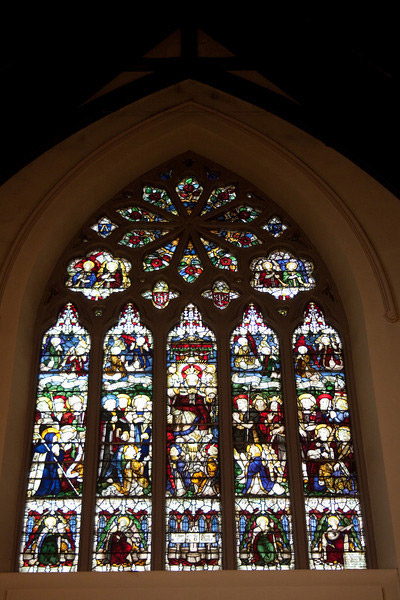 What we have done at Incarnation has brought in more viewers than formerly attended services in person. Contributing factors have included enhanced clarity for both the spoken word and music and the ability to explore an older building’s art works and hidden spaces (including a beautiful vaulted ceiling and stained glass not frequently seen due to its location).

It is important to make a “good start” with the right equipment, placement, configuration, training, and bandwidth.  This will turn into other opportunities: in our case we have seen parishioners step up and begin to drive the work. A good start could lead to engaging young people to run the equipment:  some high schools offer video production classes; outreach to identify an engaged student could be a church’s most positive step forward to re-engage another generation. A good start can also lead volunteers to come forward to lead the effort: one young woman in a church on Staten Island, a teacher, embraced streaming and led the charge because she had become so accustomed to it at school.

The possibilities are endless, and we are eager to offer an account of what we have learned. This is a new venture for all of us, so it helps to share what we are learning along the way.

Thomas M. Reefer is parish administrator at Church of the Incarnation in Manhattan. He is a lifelong Episcopalian and has served as organist and choirmaster in a variety of parishes throughout the country. Formerly, he was a school administrator and engineer in the telecommunications industry. He and his business partner who specializes in videography have founded a small firm to meet the needs of Episcopal congregations in the Diocese of New York. For contact information please visit churchstreamny.com.