Home » The Holy Spirit at St. Esprit
Print this article

The Holy Spirit at St. Esprit

Sometimes a racially jumbled and more-or-less thriving parish doesn’t come about through careful programs and strategies; it comes as a sort of happy accident of the Holy Spirit’s activity. When I came to the French-speaking church of St. Esprit in Manhattan in 1994 from England, the congregation was mostly made up of the descendants of those who fled the wars of religion in Europe in the 1600s, and European refugees who had left the continent after World War II. Many of the former were members of the lineage societies in the city, and the latter were French, Germans and Poles who had been betrayed or harshly treated by the Hitler regime and saw St. Esprit as a sanctuary in a world that was still new and strange to them. During my interview for the position of priest in charge of St. Esprit, I mentioned that there were over 750,000 French-speakers in the area, and that opening the church to wider horizons would be a wonderful renewal of its mission. The search committee nodded their assent (the only ministerial requirement they’d expressed was that the person to be appointed should speak French with a decent accent). But it didn’t take me long to see that agreeing to diversity as a principle and feeling in your heart are two very different things.

Through outreach to Francophones from all continents, and through our free French lessons, the congregation began to look more like the city we live in. In 1998, I asked a Haitian member of the congregation to read one of the lessons at our annual carol service: a service that attracted a diverse congregation. A member of one of the lineage societies sitting very close to me whispered to his wife, “It’s getting very dark in here.” At first, I thought he was referring to the atmospheric Christmas lighting arrangements; but it was his tone that bothered me. I mentioned the comment to a white American member of the vestry whom I trusted. He opened my ears to the dog-whistle language of American racism: a language that has to be learned by non-Americans, wherever they are from. It isn’t that other nations have no such language: Europeans, Africans, Asians and Latin Americans in our congregation have their own unique racist languages too. Wherever our congregation came from, the business of un-learning what we absorbed almost thoughtlessly from our cultural backgrounds became a matter of urgency if the parish was to continue to thrive.

Two things made this gospel imperative slightly easier to implement at St. Esprit. First, we were founded in 1628 by refugees. That priority was clearly still alive; the church has continued through the centuries to define itself as a place that welcomes exiles and asylees. Secondly, the French language is a great unifier, especially in worship. It’s commonly said that however well you learn a new language, there are three things that you will still do in your mother tongue: count, curse and pray. But these two factors were not enough to hold the 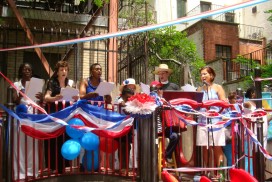 diversity of the parish together as the body of Christ. We set out to reflect that diversity in the vestry and lay leadership, to institute celebrations such as our Afrique-fête, Haitian Independence and Bastille Day. We inaugurated a hymnal project to collect francophone Anglican hymns from all over the world so that we could share the songs we loved. It wasn’t plain sailing. Several members of the American lineage societies left to go elsewhere. I suppose that some things need to be broken before they can be properly mended: and in the last few years some of those people have returned, thankful for the new mission of the parish and happy that our refugee history has been carried forward into a new century. We now have over 30 nationalities represented in our membership.

Preaching and teaching has centered on the welcome of the stranger, seeing the face of Christ in our neighbor, reading the Bible together and opening the table to all those present. It was not enough to have “parties” or celebrate our diversity through food and hospitality. That would have been an altogether secular solution to an encounter that was deeply spiritual. To be true to the Incarnation, it was important to integrate what we do around the altar with what we do when we celebrate and eat together afterwards. Our common life and the sacrament of communion had to be woven together, so that the lack of someone’s presence and voice would be felt as diminishing our wholeness both in worship and in conviviality.

We began to examine our complicity in the trans-Atlantic slave trade about 15 years ago, looking at the stories of two members of the church: one had owned a plantation in Paramaribo, Surinam and bequeathed property to us in the 1730s, and the other was Elie Naud, who founded the first school for slaves in America in the 1710s. Since then, we have recently begun to look at the repercussions of the evils of slavery not just here on the American continent where its effects are most keenly and immediately felt, but also in France and French-speaking West Africa. We are learning that this is not an evil that we can address in isolation, from a purely American standpoint. The conflicts in Central and West Africa are continuations of those evils. The rise of the extreme right in France and the UK is an outflow of the colonialism that the trans-Atlantic slave trade bolstered. In the words of Paul Bayes, the current Bishop of Liverpool, the Slave Triangle must be transformed into a Triangle of Hope.

We are in this together, and our brother and sister Christians on all continents need each other to exorcize the evils of slavery and racism that are still destructive of the Church. Under the tutelage of Christ and living together as his Body, we can kindle the Christian hope that we are able to un-learn our inherited languages of prejudice and share with trust and confidence the stories of our conversion and healing.

The Rev. Nigel J. Massey is rector of the French Church of St. Esprit in Manhattan, and serves as the chair of the diocese’s Global Mission Commission.